The design of the project has been underway to improve Route 67 from the west end of the Klarides Village retail development extending easterly along Bank Street to the eastern side of the bridge over the Naugatuck River based on the information provided in the 2016 study.

The design is being performed by SLR Consulting. It is anticipated that the design work will be completed in Spring 2023 and the project will proceed to construction in Summer 2023. Semi-Final Design Plans are currently under review. The Semi-Final Design Report is available for viewing. 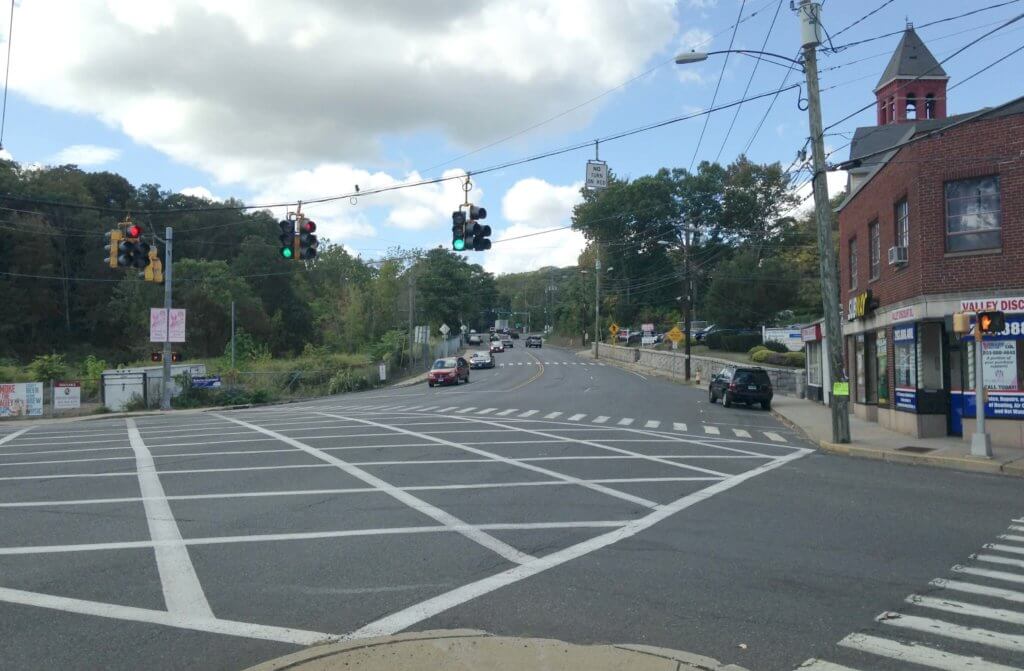 The following improvements are anticipated:

– Close the southerly portion of Johnson Street at Bank Street to traffic while maintaining access only for emergency and maintenance vehicles.  Maintain Johnson Street as a two-way street; provisions for vehicles to turn around will be needed.

– Construct a new raised island within the existing driveway to physically restrict and reinforce the left-turn prohibition for vehicles exiting the development and to revise the pavement markings on Bank Street to provide the required width for Route 67 westbound traffic to bypass vehicles turning left into the development.

– Widen Route 67 to provide adequate turn-lane lengths and 5′ shoulders on both the north and south sides of the road and reconstruct sidewalks.

– Widen River Street to provide for the required lane-queue lengths and modify the Little River bridge to accommodate the continuation of sidewalks along River Street on the upstream side of the existing bridge.

The project will also include two feasibility analyses which will investigate the following:

1. Construction of a multi-use trail along the Naugatuck River from Bank Street, along River Street to the Broad Street green.

2. Improvements to the existing sidewalk widths on the Route 67 bridge over the Naugatuck River to determine the feasibility of providing a handicapped-accessible pedestrian route from the improvements proposed under this project at the Bank Street/River Street intersection to the recently constructed Naugatuck River Greenway Trail east of the river.

In 1991 a study was conducted to assess traffic conditions along the Route 67 corridor through Southbury, Oxford, and Seymour. In 2011 the Valley Council of Governments (VCOG) hired design engineers Milone & MacBroom, Inc. to expand upon the 1991 report and to conduct additional analyses to further refine the information provided in the earlier report. Milone & MacBroom’s report focused on the segment of Route 67 in Seymour from Klarides Village to the River Street/Franklin Street Intersection.

An updated preliminary engineering study was conducted by  Milone & MacBroom and completed in March of 2016. The study and the subsequent recommended improvements are designed to address heavy congestion and safety concerns through this segment of Route 67. Accident history, traffic volumes and level of service at both signalized and un-signalized intersections were among the items studied. Pedestrian patterns were also reviewed. The report offers design alternatives and preliminary cost estimates to improve traffic and safety along the corridor while considering the impacts to and the needs of the adjacent residences and businesses, future redevelopment, and other interested or affected stakeholders.

Presentation of Updates to Design as presented on November 16, 2020