Pursuing game along several of its rivers and many tributaries, Native American tribes hunted in the area that is now the Naugatuck Valley Region. A European trading post was established in Derby, at the confluence of the Naugatuck and Housatonic Rivers.  Settlers later purchased land from the Native American tribes and villages began to form.  In the seventeenth century, settlers from Farmington, seeking land for farming, purchased a large tract in the Naugatuck River Valley, called Mattatuck at the time. Settlers from Stratford bought land from two tribes in the Pomperaug River Valley — the Southbury, Woodbury, and Bethlehem area.

As the region’s population grew in the 18th century, residents of outlying sections petitioned the General Assembly for the right to establish their Congregational parishes to avoid long treks in the winter to attend church.  The present-day cities and towns evolved from this common beginning and gained similarly English-rooted names.  Some villages formed new towns, such as Forestville and Edgewood forming New Cambridge, which would become Bristol at the time of incorporation.

In the 19th century, major industrial enterprises developed along the Naugatuck River from Derby and Shelton north to Thomaston and beyond, assisted by the area’s mechanical ingenuity and the water power available from the Naugatuck River and its tributaries.  By the time of the Civil War, the valley was a national leader in the manufacturing of brass and brass-related products including clocks, buttons, munitions, and machines. The railroad enabled raw materials to be shipped here, and finished products to markets. A network of trolleys connected residential neighborhoods in Waterbury and the surrounding towns, transporting workers to the burgeoning factories. The economic growth of the industrial centers, supported by the agricultural productivity of the surrounding towns brought prosperity to the region.

Following World War II, auto ownership led to residential growth in the region’s outer-lying farming communities. With the shift of rail to highway for goods movement and widespread auto ownership, industrial and business centers began to emerge in suburban towns around the region. Brass production soon left the region, moving closer to the ore mines, and as plastics replaced brass in many products. Despite these jolts, the innovations from the brass industry enabled local manufacturers to evolve into state-of-the-art precision metal fabrication firms. In 1955, the region changed during a devastating flood.

The region has become much more economically diversified since World War II, and recent technological changes have added to the dispersal of population and employment.  Health services, banking, business services, educational services, as well as fabricated metal products, now dominate the region’s economy. The region continues to improve as an economic, residential, cultural, and institutional center.

Did you know that .....the original Mickey Mouse watch was designed and manufactured in Waterbury? .....the first Episcopal Bishop in the "New World" was elected secretly in a Woodbury Farmhouse? .....General Rochambeau and his men were guests at several homes in the area on their march to Yorktown in 1782?.....Bristol is home to Lake Compounce, the country's oldest continuously operating amusement park? .....or that many impressive homes of the region's powerful industrial leaders still stand throughout the region?

Now you can explore the history of the Naugatuck Valley Region using the interactive storymap below.  The map presents 108 historic sites and districts listed on the National Register of Historic Places (NRHP) by the National Park Service, along with 28 local museums you can visit to learn more about the region’s past.  The map also works great on smartphones and tablets, so get out and explore!

Click the map below to explore the region’s past! 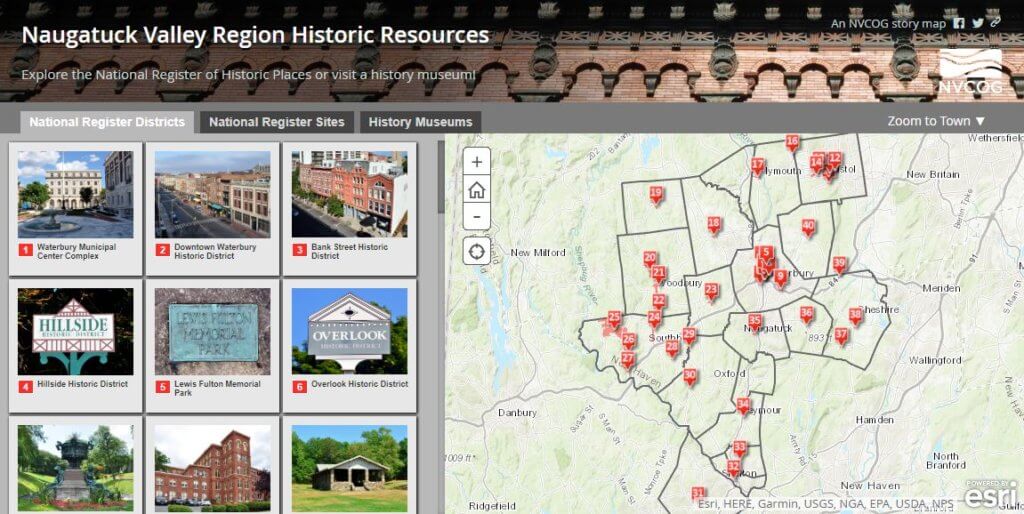 Many NRHP properties are privately owned and not open to the public. Please respect private property.

Explore the historic places in our region with the Naugatuck Valley Historic Resources interactive map.