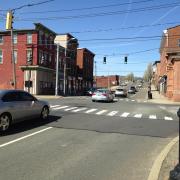 A bid opening was held on November 3, 2021. CT DOT is in process of reviewing the bids and C.J. Fucci Inc. is currently the apparent low bidder. The contract for the work is expected to be awarded within the next couple of months and construction is slated to start in April of 2022. The work will be done in multiple stages and will continue for 3 years due to the extensive amount of roadway and utility work that needs to be accomplished while still maintaining traffic throughout the project corridor.

Introduction: Route 34 exists as a primary artery through much of the lower valley and operates as a key connection between the downtowns of Shelton and Derby. Route 34 further exists as the ‘Main Street’ for Derby. This has been a major design consideration with regard to the rehabilitation of the roadway. The reconstruction project of Route 34 from Bridge Street to the Route 8 interchange was initiated to combat congestion along this stretch of road.  Secondary to this is the understanding that as the City’s ‘Main Street’ the design team needs to remain cognizant of the needs to facilitate and encourage a roadway that creates a vibrant, walkable, and visually pleasing mixed-use place.

Designer: Luchs Consulting Engineers, LLC/DeCarlo& Doll Inc. The project is being managed by NVCOG under the supervision of the Connecticut Department of Transportation.

Summary of Project: Main Street in Derby will be reconstructed between Bridge Street and Route 8. The project includes widening to create two through lanes in each direction separated by a center median, with dedicated turning lanes at intersections, improvements to traffic signals including the interconnect of the signals to improve traffic flow, improvements to parking including on-street parallel parking on both the north and south sides of Main Street and a separate parking lot on the south side of Main Street across from the Derby Senior Center with roughly 30 to 35 parking spaces,  an upgraded storm drainage system, new sidewalks with bump-outs at intersections, lighting and other streetscape features such as trees, granite curbing, and brick paver areas. Improvements will be made to Elizabeth Street, Minerva Street, Water Street, and Factory Street. Elizabeth, Minerva, and Thirds Streets will be converted to one-way circulation. Traffic will travel north on Minerva and south on Elizabeth. Angled on-street parking will be implemented on Minerva Street. Parallel on-street parking will be maintained on Elizabeth. Parallel on-street parking will be implemented on Third Street. Pedestrians will have refuge islands mid-way as they cross Main St. Sanitary sewer improvements will also be incorporated into the project.

Aerial Visualization includes the cycle track which has now been removed from the project resulting from public input. Parking along the south side of Main Street will be added. 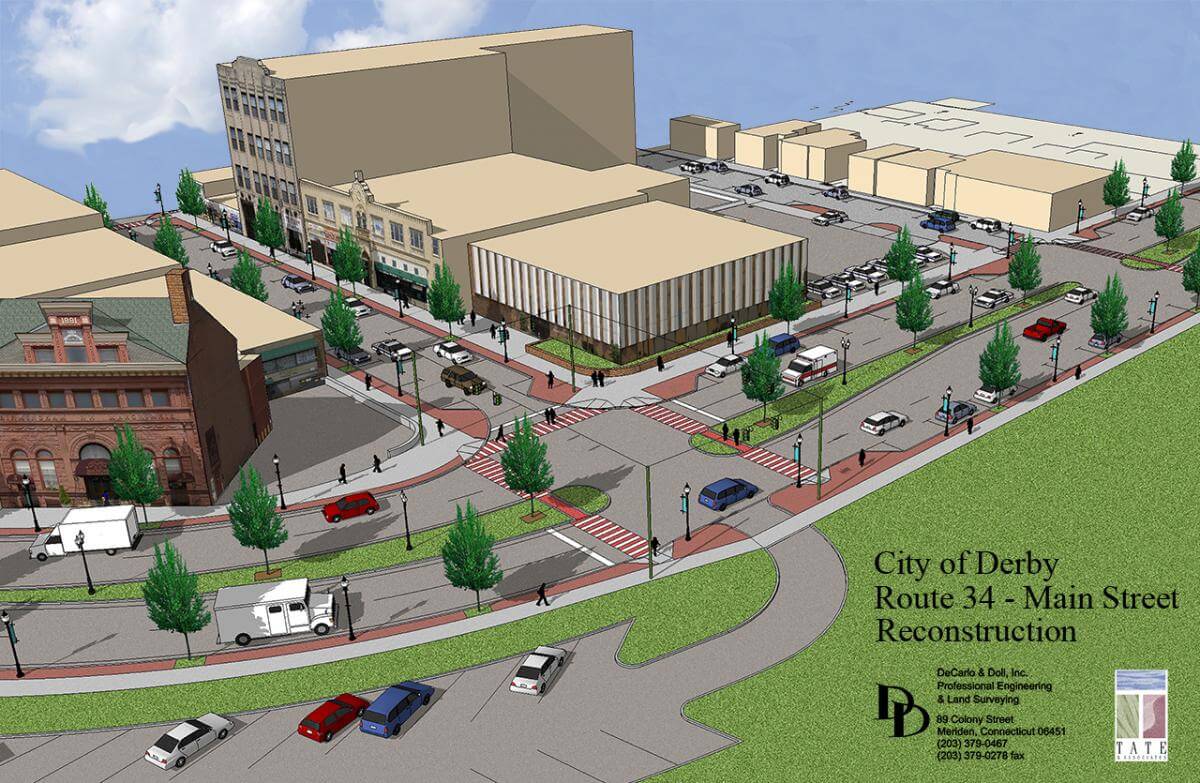