Construction is underway and expected to continue through the 2023 construction season due to the extensive amount of utility relocations that are a necessary part of the bridge rehabilitation work. Mohawk Northeast, Inc. is the prime contractor.

The project plans were also updated to include the extension of the cycle track and pedestrian walkway down the southeast ramp to Canal Street. The ramp has been permanently closed to motor vehicles. Access to Bridge Street from Canal Street has been routed to the new roadway through the former Spongx property that now houses the Canal Street Lofts Building.

The design team successfully worked with CTDOT to incorporate accent lighting to the bridge in order to illuminate the bridge at night.

The Derby-Shelton Bridge carries Bridge Street (State Road 712) over the Housatonic River between Downtown Shelton and Downtown Derby. The bridge is a primary crossing of the Housatonic River within the Naugatuck Valley Region and is a critical element of the regional infrastructure. The bridge was built in 1918 and is historically significant. While the substructure is in good condition, many elements have deteriorated over time, including the pavement structure, parapet walls, and lighting.

The intent of the project is to renovate and rehabilitate the elements along the top of the bridge and enhance the bridge’s aesthetics. Because it connects two downtowns, there is an opportunity to improve not only its function but also its form and create an aesthetically pleasing public space for pedestrians and bicyclists. The project limits extend from the intersection with Route 34 (Main Street) in Derby to the west end of the Derby-Shelton Bridge and includes the connections to Canal Street.

The project is being designed by AECOM under contract to the NVCOG. Construction will be advertised and administrated by the Connecticut Department of Transportation (CTDOT).

The proposed improvements to the bridge include adding a second through travel lane in the eastbound direction, installing of a two-cycle track for bicyclists, and creating a wider pedestrian plaza. In addition, existing deteriorated elements will be replaced and upgraded. 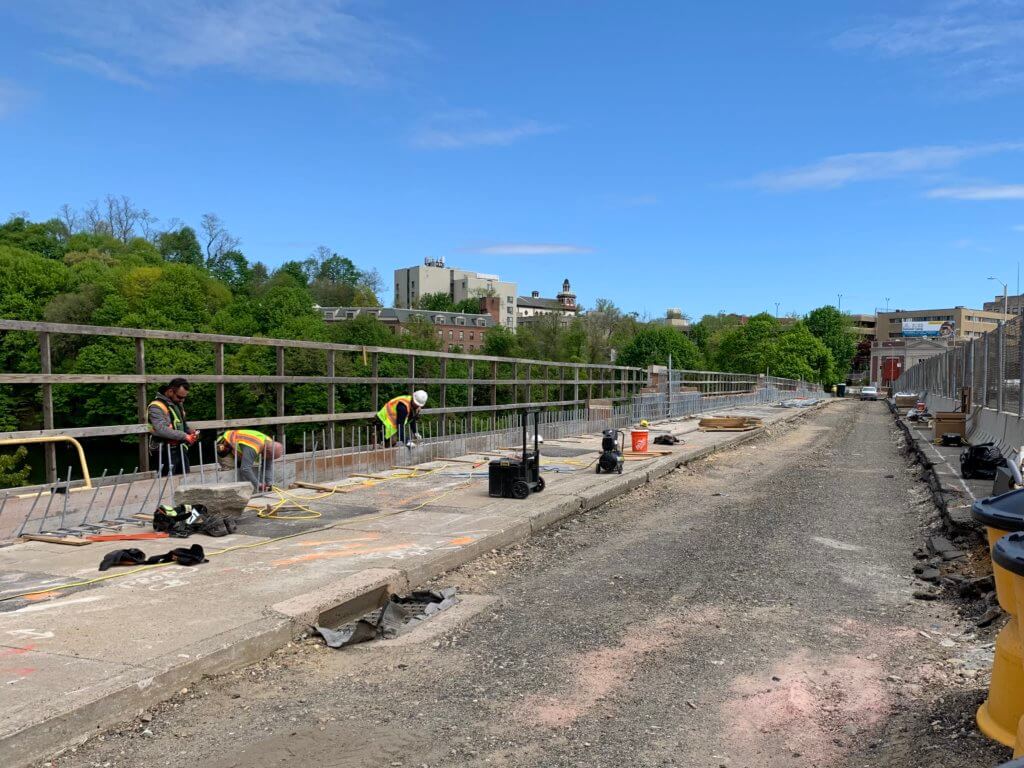 A meeting was held on February 26, 2020, to provide updated project details to residents, commuters, business owners, and other interested individuals. Click here for minutes from the February 26 meeting.