On Friday, September 14, The Naugatuck Valley Council of Governments (NVCOG) will provide a presentation to area mayors and first selectmen on opportunities for potentially significant municipal health insurance savings. The presentation will focus on savings available via a ‘captive’ insurance company, which is a risk-bearing entity formed to insure or fund the risks of its owners. A captive allows members to negotiate better terms and stabilize and reduce insurance costs and is typically tailored to address specific risk issues or risk opportunities.

The presentation, as part of NVCOG’s monthly meeting, will be provided by the CT Prime Incorporated, which was instrumental in establishing a stop loss captive for 12 Connecticut towns in the Capitol Region Education Council (CREC). This group includes Cheshire, one of NVCOG’s 19 member towns. In 2016, CREC formed CT Prime, whose towns and districts previously purchased stop-loss coverage individually to cover unexpectedly high claims. However, premiums for that stop-loss coverage were fairly volatile year to year for some towns, which pushed CREC to form its own captive insurer. CT Prime purchases stop-loss policy from the reinsurance market on behalf of its members, utilizing increased bargaining power to access more competitive premiums than any single town or district could get on its own. In all, after the first year, the towns and districts saved a total of $3 million in premiums compared to what they were paying before CT Prime was created.

In April 2018, NVCOG provided a presentation for its municipalities that currently engage in some form of self-insurance, as participation in a stop-loss captive could be an effective progression in providing health insurance cost savings. Municipalities ranging from Waterbury and Bristol to Derby and Wolcott subsequently provided data to CT Prime in order to determine the cost effectiveness in joining the existing captive or creating a cell within CT Prime serving NVCOG municipalities.

“Health insurance costs have long proven one of the more challenging components in any municipal budget,” said, NVCOG Municipal Shared Services Director John DiCarlo. “Increased buying power for Stop Loss insurance has the potential to yield significant, long term benefits and we want to ensure that our region’s cities and towns can learn more about such opportunities.” 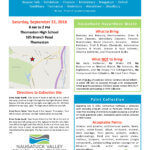