Waterbury, Conn. – The Kinneytown Dam, owned by Hydroland Corporation, has blocked migratory fish passage on the Naugatuck River for long enough. Today the Naugatuck Valley Council of Governments (NVCOG), comprised of the 19 municipalities surrounding the Naugatuck River, along with environmental organizations Save the Sound and Naugatuck River Revival Group (NRRG), have jointly taken legal action at the Federal Energy Regulatory Commission (FERC), aimed at restoring the once thriving sea-run fisheries of the Naugatuck River. The legal filing by NVCOG, Save the Sound, and NRRG asks FERC to revoke Hydroland’s operating license exemption.

“Hydroland has ignored their responsibility to manage and maintain Kinneytown Dam for too long, and they do not deserve the license exemption they have,” said Mayor Pete Hess of Naugatuck. “We won’t tolerate a facility that damages the environment and is unsafe in our communities any longer.”

“Let’s face it, these generating plants have been off-line for some time—one for more than a decade. Without the generation of power, we need to question the role played by this abandoned facility that damages our restored river,” Mayor Neil O’Leary of Waterbury added. “We are asking FERC to take more direct action against this operator. We have to find a way for fish to migrate past this obstruction on the Naugatuck River so that we can finally realize all of the benefits of the public investments made by Connecticut taxpayers, our partner river towns, and the many activists in restoring the Naugatuck River over the past decades.”

Longstanding and severe problems with fish passage conditions and actual passage of individual species at the dam have been detailed in multiple studies previously submitted to FERC. These longstanding problems include failure to control spill coming over the dam, a fish ladder that was not constructed as designed and is not being operated as required, and an unauthorized shutdown of one of the operating turbines.

“For many years, including 2021, the dam has served as an almost complete barrier to thousands of fish, including American shad and river herring, that are coming into the river from Long Island Sound and attempting to spawn upstream,” said Kevin Zak, founder of Naugatuck River Revival Group. “The fish ladder is a failure, and it has been since it was built. Little has been done to remedy this situation for the past 20 years, and recent efforts by the agencies have been met with radio silence by dam owner Hydroland. Clearly something more must be done.”

In November 2020, and again in July 2021, Save the Sound and NRRG submitted photographic and video documentation to FERC demonstrating the presence of hundreds of migratory fish below the dam, and showing their inability to pass the dam during the upstream migration that occurs each spring. Then, in September, a team of experts from Save the Sound, NRRG, and Queens College, CUNY, submitted to FERC an analysis, based upon two decades of Connecticut Department of Energy and Environmental Protection (CT DEEP) data gathered at the dam site, showing that favorable water flows for fish passage at the dam occur only during 39 percent of the peak fish passage period in the average year due to operational and structural conditions. Some years have little or no favorable flows for the entire spring fish run, resulting in extremely low passage rates.

The impacts from this situation are dramatic: from 2000 to 2020, the average number of fish passing Kinneytown Dam annually for three target species for restoration—American shad, blueback herring, and alewife—was 12.5 individual fish combined from April 1 to July 1—a fraction of a percentage of the original restoration goals of more than 22,000 shad and 220,000 river herring (blueback herring and alewife) expected to be counted annually.

Over the last several months, FERC, which is responsible for licensing the dam and overseeing its operations, has ordered Hydroland to explain this situation and to comply with directives from state and federal resource agencies. To date, Hydroland has failed to respond, missing all filing deadlines required by FERC, and has taken no required actions onsite. FERC has also cited multiple safety concerns related to the site.

Save the Sound staff attorney Kat Fiedler stated, “Hydroland is in violation of numerous fundamental conditions of its operating license exemption, including improperly constructed facilities, changes to operations, and decades of neglect and deterioration allowed by previous dam owners and now Hydroland. Even with renewed attention to this issue by the federal agencies, deadlines to address this situation set by those agencies have been completely ignored, continuing this history of complete disregard for the environmental harm caused by this dam. Our legal action asks FERC to exercise its authority revoke the current exemption.”

Among other relief, today’s filing by NVCOG, Save the Sound, and NRRG asks that:

A. FERC declare the Kinneytown fish passage operations out of compliance with its exemption.

B. FERC revoke the current exemption and require the owner apply for a new exemption or license, and that any new application include designs, based on best available engineering and science, for safe, timely, and effective fish passage. 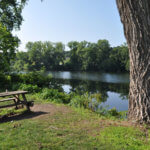