NEC Future is a Federal Railroad Administration-led effort to envision the future of the Northeast Corridor.   The effort has identified several opportunities and investment alternatives for rail service in the State of Connecticut.  The vision is unconstrained by funding limits, constructability, environmental or community impacts. The FRA is seeking public comments on the NEC Future Draft Environmental Impact Statement (DEIS).  FRA has scheduled public forums in New Haven on December 14 and Hartford on January 13.  They will also accept written comments through January 30, 2016.

Connecticut Department of Transportation (CTDOT) is looking forward to hearing your comments on the NEC Future DEIS.  CTDOT will provide comments once other Connecticut stakeholders have had an opportunity to review the document and participate in the public forums.  Following are some key points and potential questions for your consideration during the public hearing and comment period.

No Action Alternative includes a $9 Billion infrastructure base cost.

Maintain – Alternative 1 $52 to $54 Billion plus $9 Billion infrastructure base cost.

Transform – Alternative 3 $258 to $293 Billion plus $9 Billion infrastructure base cost.

Alternative 1 maintains current market share, requiring new investment to keep pace with population growth and employment. Alternative 2 accommodates projected 2040 demand. Alternative 3 allows for expanded growth beyond the project 2040 demand.  These alternatives make assumptions about future economic growth and development in the corridor and customer preferences which are linked to service levels and pricing.  It appears the biggest return on investment (defined solely on  ridership and market share) is with Alternative 1 with lesser benefits accruing from Alternative 2 and Alternative 3.  The economic impacts and future land use impacts are not part of this evaluation.

What are the potential implications and impacts of the different alternatives?

The NEC Future document offers three distinct alternatives and No Action baseline for comparison purposes.  The purpose of the NEC Future planning effort is to identify a vision for future investment in the Northeast Corridor. All three alternatives would require extraordinary investment, many orders of magnitude greater than current funding levels.   These alternatives must not only be evaluated from an economic perspective, but also viewed through the lens of community and environmental benefits and impacts.

What is the role of the Federal government (i.e., FRA, Amtrak) in advancing the NEC Future Program?

The Federal Railroad Administration has indicated the selection of a preferred alternative will be informed by the public comments it receives during this comment period.  Critical issues for CT include federal funding commitments for the existing system and any of the alternatives in addition to the need to have EIS documentation for critical infrastructure investments in CT.

How do the alternatives impact service and capacity on the New Haven Line?

The advancement of one or more of the three alternatives would require discussion with FRA and Amtrak on the future of the Northeast Corridor/New Haven Line and branch lines.  Specific service plans are not available at this time.  FRA plans to complete a Service Development Plan after a final alternative is selected.

Other questions that may be considered during the public comment period:

What is actually sought by FRA in terms of public input?

This is an enormous amount of information to read, understand and comment on.  Is it possible to extend the comment period?

While the overall costs have been estimated, there is no funding plan.  When will that be done? 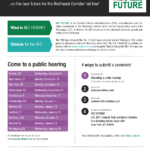