The US Department of Commerce announced on December 14 that the Naugatuck Valley Council of Governments (NVCOG), in partnership with Save the Sound, has been recommended for funding for a project intended to lead to the removal of Kinneytown Dam in Seymour, CT. The funding is being made available through the National Oceanic and Atmospheric Administration’s (NOAA) Restoring Fish Passage through Barrier Removal grant program. NVCOG requested $15 million from the program earlier this year for a project that would include decommissioning the facility, designing the deconstruction, and ultimately removing the dam and restoring the river.

Kinneytown Dam is a hydroelectric facility on the Naugatuck River consisting of two dams with powerhouses in Seymour and Ansonia, CT. It is currently owned by HydroLand, Inc. The powerhouse in Ansonia has been offline since before 2013, and the powerhouse in Seymour has not produced electricity since 2020.

Since 2019, NVCOG has been working with partners Save the Sound and the Naugatuck River Revival Group (NRRG), collectively as the Naugatuck River Restoration Coalition, to address long standing fish passage and condition issues at Kinneytown Dam. In 2019, 2020 and 2021, Save the Sound and NRRG documented that hundreds of migratory fish were gathering and dying below the dam, unable to access habitat upstream.

“The removal of Kinneytown is the keystone to restoring this river,” says Kevin Zak, President of NRRG. “This funding would go a long way in freeing this river from 200 years of neglect. Reaching this point is a result of extreme dedication, coordination, and hard work from many individuals and organizations both public and private, proving nothing is impossible. The collaboration of Save the Sound, NVCOG, NRRG, NOAA, USFWS, DEEP, local mayors, and the Federal and State Delegations, is a notable example of how to work together for the public good. This is only the beginning; the best is yet to come.”

For years, the facility has been almost a complete barrier to the thousands of migratory fish from Long Island Sound attempting to reach miles of spawning and rearing habitat in the Naugatuck River. A fish ladder constructed in 1999 at the facility has been shown to be ineffective under most conditions. The effectiveness of the fish ladder was further limited due to heavier flows over the dam’s spillway since the powerhouses have gone offline.

Now, advocates want this major impediment to the fish passage on the Naugatuck River gone. Dams all along the river have been removed and a fish bypass channel was installed upstream from Kinneytown at Tingue Dam in Seymour—but those upstream habitat restoration efforts have remained inaccessible by the passage restrictions at Kinneytown. Once it is removed, fish species like blueback herring, alewife and American shad will have full access to the length of the Naugatuck River to Thomaston.

“We have a unique opportunity to take down a dam that has only served to impede the Naugatuck River’s ability to flourish. Removing the obstruction will make an invaluable contribution to the river’s health, making it an asset for the region and the entire state of Connecticut.” said Waterbury Mayor Neil M. O’Leary and Chairman of the NVCOG.

NVCOG developed the proposed project in partnership with Save the Sound, and the nonprofit will be a subrecipient of funds through NVCOG. Save the Sound’s ecological restoration team brings decades of dam removal and habitat restoration experience to the project, and Regional Director of Ecological Restoration, Laura Wildman, played a leading role in all the upstream dam removals in the 1990s.

“The Naugatuck River, which once flowed different colors each day, is getting significant attention from the federal government,” says Wildman. “This is exciting for me because my involvement in this river started over two decades ago, when I was a project engineer focused on removing five upstream dams. Being able to finally address the first barrier on the system with Save the Sound feels very fitting and fulfilling. Our entire organization, particularly our legal team, has been tirelessly advocating for
successful fish passage at Kinneytown Dam for years. This funding ensures that this once industrial sewer will return to the life-supporting, swiftly flowing river that initially cascaded down the Naugatuck Valley.”

NVCOG and Save the Sound will be negotiating the award and project scope with NOAA. Final approval is subject to funding availability as well as final review and approval by both NOAA Grants Management Division and Department of Commerce Financial Assistance Law Division. No application is “awarded” until it has been signed by the official Grants Officer.

In addition to restored fish passage that will draw anglers to the valley, the project will also reduce flood risk upstream and downstream of the dam and establish new recreational river access. Restoring sediment flow will also benefit coastal areas downstream. 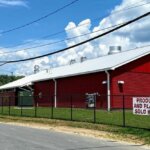 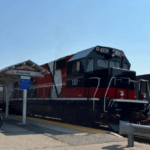