There have been some recent developments in planning and construction of the Naugatuck River Greenway Trail and other region multiuse trails.

On March 10, the Naugatuck River Greenway Steering Committee (NRGSC) endorsed updated NRG Trail Project Priorities.  The NRG Trail Project Priorities – March 2021 Report and accompanying Interactive Map, provide details about the seven identified priority sections and criteria used to identify them as such.  It also provides up to date information about the routing and status of all trail sections.

Construction on Ansonia Riverwalk Segments 3 and 4, part of the NRG Trail, is underway.  The sections consist of a paved walkway on the existing levee embankment that will extend from South Main Street to the parking lot on the Target property on the East side of the Naugatuck River. There will be two rest areas with benches and one observation platform to view the natural habitat. Additional trees and landscaping improvements will be made at the main entrance adjacent to the Target parking lot. Schultz Corporation will be doing the construction and the project was designed by Luchs/DeCarlo and Doll. The project was funded through the Transportation Alternatives Set Aside Program.

The first NRG section in Waterbury along the Naugatuck River is going to be delayed a bit longer due to shortages of building material that stems from issues related to the COVID-19 pandemic, according to city officials. The City planned to start this spring on a 2.2-mile stretch of the pathway, which will eventually be part of of the City’s 7.5-mile section of NRG Trail. Now, Mayor Neil M. O’Leary expects to begin work in mid-June.

Construction has commenced on a project to renovate and rehabilitate the Derby-Shelton Bridge. Improvements will include a connection between the NRG Trail in Derby and Shelton’s River Walk with the creation of a larger pedestrian space and a bi-directional cycle track to separate bicyclists from both vehicular traffic and pedestrians.

Funding has been awarded to Watertown for the construction of a section of Steele Brook Greenway, a multi-use trail in Watertown. This project will connect two existing sections of trail and construct a new pedestrian bridge over Steele Brook near French Street. Watertown was awarded federal funding for the project under the Transportation Alternatives Set Aside Program. The project has not yet been initiated. 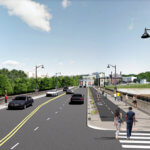 Work to Begin on the Derby-Shelton Bridge 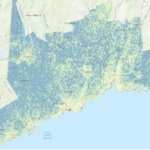