On Wednesday, January 9, The Naugatuck Valley Council of Governments (NVCOG) will hold a second public information meeting to update the public on the design of renovations and enhancements to the Derby-Shelton Bridge over the Housatonic River (snow date Thursday, January 17). The meeting will begin at 6 p.m. in the Aldermanic Chambers in Derby City Hall, 1 Elizabeth Street, Derby and provide residents and stakeholders an opportunity to learn project details, including updated design plans and project timeline, and provide input on the design changes that have taken place since the first public informational meeting that was held on April 18, 2018.

The intent of the project is to create an aesthetically pleasing public space along the Derby-Shelton Bridge and provide an attractive gateway to the downtown areas of Derby and Shelton. It is being designed by AECOM under contract to the NVCOG. Construction will be advertised and administrated by the Connecticut Department of Transportation (CTDOT).

• The replacement of bridge parapet walls; The new parapet will be a solid concrete wall and include decorative metal railings; The railing treatment and its placement along the parapet will provide safety, as well as aesthetically attractive sightlines.

• The removal of existing lighting and replacement with period style lights that both enhance the presence of the bridge at night and comply with dark sky guidelines;

• Various roadway improvements, including adjusting the lane and shoulder widths and providing a second eastbound traffic lane, increasing the width of the sidewalk on the south side of the bridge to accommodate a larger public space and a separated lane for bicyclists.

• The project will also offer connectivity with the existing Housatonic Riverwalk trail network in Shelton and the Derby Greenway/Naugatuck River Greenway in Derby. The project limits will extend from the Bridge Street intersection with Main Street in Derby to the west end of the Derby-Shelton Bridge and includes the connections to Canal Street.

It is currently expected that the design will be completed in late 2019, with construction being bid in early 2020 and completed by the end of that calendar year. While travel lanes may be narrowed, there will be no reduction in roadway capacity.

“There have been some minor modifications to the project since our last public information meeting in April to consider comments we had received,” said Mark Nielsen, NVCOG Director of Planning. “The January 9 meeting will give residents and stakeholders the opportunity to learn about those changes, as well as allow for input and comments as the project enters the final design phase.” 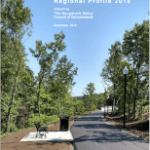