Fritz Blau, chairman of the Stamford Republican Town Committee, believes the pandemic is “overblown” and should be treated more like the annual influenza viruses.

“I don’t see the infection and mortality exceeding any regular flu virus that we have. I’m not saying it doesn’t kill some people, but I think the flu does, too,” Blau says.

Imperati and Blau are among the lingering, and perhaps rising, voices who say the national response to coronavirus is too severe and that the country is almost ready to get back to normal. Even as huge swaths of public life in the United States and much of Europe remain at a standstill — with new restrictions still rolling out — these voices form a debate that’s mostly partisan, fueled by two cable news channels and by President Donald Trump.

Trump on Sunday evening extended the federal social distancing guidelines to April 30, but he has wavered in his support for the extreme measures.

Last week he shocked even some of his own public health officials by publicly hoping that churches would reopen by Easter, April 12, and suggesting that the economy may be ready to reopen soon. “You can destroy a country this way, by closing it down,” he said on a Fox News town hall broadcast from the White House Rose Garden.

National, state and local health officials say the threat is growing and is not near a peak in most places. On Sunday, the death toll stood at 2,400 but the nation’s top infectious disease expert, Dr. Anthony Fauci, said the United States could see 100,000 to 200,000 deaths from COVID-19 — an estimate some have said is way too low.

“Scientific information must guide public policy,” said Bob Lion, a Democratic member of the Stamford Board of Representatives. “We are facing a health crisis that must be our priority.”

The consensus for social distancing, travel restrictions and a shutdown of non-essential businesses in afflicted states is clear. On Saturday, Trump said he was considering ordering a two-week “quarantine” of metro New York City, including part of Connecticut — clarifying that he meant a ban on non-commercial travel in and out of the region.

He later decided to limit the move to a travel advisory from the Centers for Disease Control and Prevention, and he is adding states — including Connecticut, on Sunday — to the federally designated “major disaster declaration” list, which brings more emergency aid.

New shifts in national polls show that overall, people are becoming more scared and uncertain — and they generally support steps to tackle the crisis.

But the partisan argument still simmers, with the state’s rising daily death toll from COVID-19 as a backdrop.

Rather than seeing a traditional issues debate, Connecticut State House Minority Leader Themis Klarides, R-Derby, offered a tempered assessment, saying Trump’s comments about reopening the economy should be seen through the lens of health experts, who have a role that’s different from the president.

“Any of us, as leaders, know it’s a bad situation,” Klarides said Friday. “We know how serious it is, then we have to give people some positivity. I think we would all like the economy back by Easter. I think the president realizes this is not likely. But he’s trying to give people some hope.”

Coronavirus: the ‘cause du jour’

Even before Lamont on Thursday ordered gun stores to open by-appointment-only to limit crowds, Imperati implemented a similar policy at his store, the Hunter’s Shop, on Branford’s West Main Street.

But the fact that state lines and thousands of businesses deemed “essential” remain open is proof to him that things aren’t as bad as officials and public health authorities claim.

“If you’re predicting that it’s that bad, why isn’t everything closed?” he said in a phone interview. “Why aren’t they stopping it in its tracks?”

Blau, the Stamford GOP leader, believes the Democratic mayors and governors around the country are using the coronavirus as cover for their political campaigns.

That’s reflected in many quarters of the Republican Party in Connecticut, including the party chairman.

“Everything the Democrats are doing is for the presidential race,” said J.R. Romano, Republican state chairman.

“What makes me laugh is that President Trump is criticized for trying to give hope,” Romano said Friday. “Democrats are trying to create a narrative that the president is failing the American people. The big story today is the U.S. leads the world in infections. No one is denying it’s a pandemic, but don’t you think China was lying to us about the number of cases?”

Anthony Simonetti, the Shelton Republican chairman, praises Trump, Vice President Mike Pence and other members of their administration for their response, though he’s not personally optimistic that business will be back to normal by Easter.

“Part of the president’s job is to not only lead us to be safe, but he has to be a leader that knows how to bring our economy so that people can go back to their lives as normally as possible,” he said. “And he realizes and recognizes that there has to be a day when this has to begin. And if Easter’s the day, so be it. If it’s the week after Easter, so be it.”

Shelton Mayor Mark Lauretti, another Republican, said his northeastern end of Fairfield County seems to be avoiding the rate of infections seen in the southwestern corner from Greenwich to Westport.

“I think the president’s correct that areas of the country least affected should start putting people back to work,” Lauretti said. “I think by Easter we’ll be able to understand better how it’s trending or not trending. Last year 70,000 people died from influenza, we’re not close to those numbers.”

The CDC’s estimates of U.S. deaths from influenza have ranged from 23,000 to 61,000 per season, with each season covering parts of two years.

Democrats have lambasted Trump’s uneven response and will continue it through the presidential campaign. The president has shrugged off criticism, and even filed a lawsuit to stop an attack ad, after the Senate did not remove him following his impeachment in the U.S. House of Representatives.

Trump’s popularity is now equal to its height of three years ago, at 49 percent in the latest Gallup Poll. At the same time, a Pew Research Center poll from March 26 illustrates growing fears about the virus and the effects on the economy, with a jump of 20 percentage points over the last two weeks in the number of Americans who agree that the coronavirus is a major threat to public health.

Asked whether Trump has been receptive to warnings and requests for more aid, Gov. Ned Lamont said in a recent news conference that he doubts it.

“It’s just bizarre that President Trump has spent so much time saying everything is great and wonderful,” said Martin M. Looney, D-New Haven, the state Senate president pro-tempore. “I think the federal response has been inadequate at this point, by at least a couple weeks. I think the fact that he can put an arbitrary deadline on something like the plague is outrageous.”

“The president would like you to think that we can set an expiration date on the virus,” says U.S. Sen. Chris Murphy during a news conference with Lamont on Thursday. “That’s not how this works. There’s no country that has turned the corner on COVID-19 by giving up on emergency authority and social distancing. If we all make good decisions together, then this doesn’t have to last for six to 12 months.”

‘Rallying around a president’

Professor Jennifer Dineen, director of the graduate program in survey research at the University of Connecticut, pointed to the different realities part of Trump’s base and the rest of the country are seeing.

“We’re seeing some increased anxiety among the American public,” she said “What his base is still seeing is not quite the same threat level as others.”

The Pew Research poll indicates that 78 percent of Democrats and 52 percent of Republicans say the coronavirus is a major threat to the nation’s health. It reports that 71 percent of the more than 11,000 respondents said shutting most businesses, except grocery stores or pharmacies, is necessary.

Eighty-one percent of Democrats and Democratic-leaning independents support the closures, while 61 percent of Republicans and GOP-leaning unaffiliated voters think it should be required.

Coincidentally, during a week in which Trump gave up on mass campaign rallies and instead held White House news conferences, he’s reached the highest rating in his three years. In the Pew poll it was 45 percent, up from 40 percent in January.

She recalled that after the September 11, 2001 attacks, President George W. Bush received a 25 to 30 percentage point boost in approval that lasted as long as four months. She described Trump’s five-point increase as a “blip.”

“There is a good amount of history of rallying around a president in times of crisis,” Dineen said. 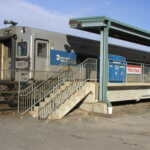