The Public Hearing is being held pursuant to Sections 10 and 19 of Special Act 77-98, as amended. The application and accompanying information is available for public inspection between the hours of 8 a.m. and 5 p.m. at the office of the Regional Water Authority, 90 Sargent Drive, New Haven, CT.

All users of the public water supply system, residents of the Regional Water District, owners of property served or to be served, and other interested persons shall have an opportunity to be head concerning the matter under consideration.

The Naugatuck Valley Council of Governments (NVCOG) is seeking the services of a transportation analytics provider to determine travel patterns and origins and destinations to, from and through the Naugatuck Valley planning region to permit the NVCOG to develop trip reports, trip matrices and determine how trips travel through the region. The scope of services is detailed in the Invitation for Bid. Bids will be accepted until 4:00 pm on Friday, February 15, 2019.

The New York Metropolitan Transportation Council (NYMTC) announces the next meeting of its Metropolitan Mobility Network on Wednesday January 30, 2019 at 10 am. The meeting will be held at the NYMTC office in lower Manhattan. For security purposes, please RSVP to andrea.miles-cole@dot.ny.gov . Please note that the meeting also will be available remotely as a webinar using the following link at the time of the meeting:  https://meetny.webex.com/meetny/j.php?MTID=m8d20fe0ce32e263d55e9d6212c884701

The purpose of these two projects is to address all structural deficiencies of the four bridges and improve the bridges to a state of good repair. The project rehabilitation consists of repairing the steel superstructure, patching of the concrete deck and repairs to the substructure.

Open forum for individual discussions with DOT officials will begin at 6:30 p.m. Formal presentation at 7 p.m.

Residents, commuters, business owners, and other interested individuals are encouraged to take advantage of this opportunity to learn about and discuss the proposed project.

On Wednesday, January 9, The Naugatuck Valley Council of Governments (NVCOG) will hold a second public information meeting to update the public on the design of renovations and enhancements to the Derby-Shelton Bridge over the Housatonic River (snow date Thursday, January 17). The meeting will begin at 6 p.m. in the Aldermanic Chambers in Derby City Hall, 1 Elizabeth Street, Derby and provide residents and stakeholders an opportunity to learn project details, including updated design plans and project timeline, and provide input on the design changes that have taken place since the first public informational meeting that was held on April 18, 2018.

The intent of the project is to create an aesthetically pleasing public space along the Derby-Shelton Bridge and provide an attractive gateway to the downtown areas of Derby and Shelton. It is being designed by AECOM under contract to the NVCOG. Construction will be advertised and administrated by the Connecticut Department of Transportation (CTDOT).

• The replacement of bridge parapet walls; The new parapet will be a solid concrete wall and include decorative metal railings; The railing treatment and its placement along the parapet will provide safety, as well as aesthetically attractive sightlines.

• The removal of existing lighting and replacement with period style lights that both enhance the presence of the bridge at night and comply with dark sky guidelines;

• Various roadway improvements, including adjusting the lane and shoulder widths and providing a second eastbound traffic lane, increasing the width of the sidewalk on the south side of the bridge to accommodate a larger public space and a separated lane for bicyclists.

• The project will also offer connectivity with the existing Housatonic Riverwalk trail network in Shelton and the Derby Greenway/Naugatuck River Greenway in Derby. The project limits will extend from the Bridge Street intersection with Main Street in Derby to the west end of the Derby-Shelton Bridge and includes the connections to Canal Street.

It is currently expected that the design will be completed in late 2019, with construction being bid in early 2020 and completed by the end of that calendar year. While travel lanes may be narrowed, there will be no reduction in roadway capacity.

“There have been some minor modifications to the project since our last public information meeting in April to consider comments we had received,” said Mark Nielsen, NVCOG Director of Planning. “The January 9 meeting will give residents and stakeholders the opportunity to learn about those changes, as well as allow for input and comments as the project enters the final design phase.”

NVCOG staff has just completed an update to the Regional Profile for the 19-municipality Naugatuck Valley Region. The Regional Profile compiles population, economic, and housing data from a variety of sources including the U.S. Census Bureau, the Connecticut Department of Labor, and the Connecticut Department of Economic and Community Development. 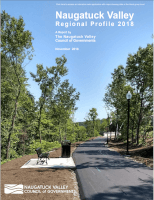 As a supplement to the Regional Profile, NVCOG staff has created an interactive web-based application to provide access to the U.S. Census Bureau’s American Community Survey data at the block  group or block level. This tool allows users to obtain statistics for smaller areas within a municipality. The application can be accessed here:

The MAP Forum is a consortium of metropolitan planning organizations (MPOs) in New York, New Jersey, Connecticut and Pennsylvania that have signed a Memorandum of Understanding (MOU) for the coordination of planning activities in the multi-state metropolitan region. Click here for the meeting agenda. 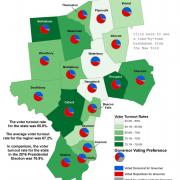 Voter turnout is the percentage of eligible voters who cast a ballot in this past election; data is from the Connecticut Secretary of State website.

The map shows the voter turnout rate for the 19 municipalities within the region, along with results for the gubernatorial race.

The preliminary design has been completed for the City of Ansonia’s construction of approximately 2,100 feet of multi-use trail, which is part of the Riverwalk improvements to create the Ansonia Park & Riverwalk – Segments 3 & 4.